Chiropractic
The first chiropractic adjustment was performed in the month of September 1895 by D.D Palmer. The word ‘Chiropractic’ comes from the Greek words cheir (meaning ‘hand’) and praktos (meaning ‘done’), i.e. Done by Hand. As the story is told D.D Palmer was communicating with the janitor Harvey Lillard of the building he was renting space in. Harvey communicated to D.D that he was working in a closet 17 years ago, he twisted and felt a pop with pain in his upper back and proceeded to lose his hearing over the following days. D.D theorized that “if he felt something in his upper back pop out and lose his hearing than if I popped it back in, it would restore his hearing”. D.D examined Harvey’s back looking for an area of inflammation. After finding the area D.D considered to be displaced he performed the first chiropractic adjustment. Harvey began to observe his hearing returning and after a number days his hearing fully recovered.
D.D thought he had discovered the cure for deafness with his first chiropractic adjustment. So he had flyers printed up announcing the cure for deafness and had his young son B.J Palmer go thru out the cities of Davenport, Moline and Rockland tacking the flyers up on telephone poles and announcement boards. Soon, he had deaf people coming to him with hopes of regaining their hearing. Not one deaf person regained their hearing but other health problems they had been experiencing began to improve or go away. Instead of looking at his cure for deafness as a failure he realized he had discovered something so much bigger.

DD Palmer was an eclectic genius and a prolific reader of all things scientific. D.D realized that although various forms of spinal manipulation had been used for hundreds of years, no one had developed a scientific rationale or philosophical theory to explain their effects. Palmer’s major contribution to the health field was the codification of the philosophy, art and science of chiropractic which was based on his extensive study of anatomy and physiology.
From that first adjustment, DD Palmer continued to practice and develop the art, science and philosophy of chiropractic. One day as D.D was walking home he was nearly run over by a horse drawn wagon. His son B.J. convinced him to begin teaching his discovery so it would not be lost if he was to die. In 1897 D.D established the Palmer School of Cure, now known as the

Palmer College of Chiropractic, in Davenport, Iowa, where it remains today. Many people became interested in Palmer’s new science and healing art. Among his early students were D. D’s son, Bartlett Joshua (B.J), as well as members of the older healing arts of medicine and osteopathy. The first state law licensing chiropractors was passed in 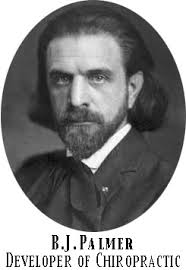 D.D Palmer’s theories of chiropractic revolved around the concept that altered nerve flow was the cause of all disease, and that misaligned spinal vertebrae had an effect on the nerve flow. He postulated that restoring these vertebrae to their proper alignment would restore health.  "A subluxated vertebra ... is the cause of 95 percent of all diseases ... The other five percent is caused by displaced joints other than those of the vertebral column.”

Today we know that this is not the case but we do know that misaligned vertebra alters the normal biomechanics of the joint affecting the nerve function and the organs those nerves supply. We also know that Chiropractic has been around for 120 years helping millions of people all over the planet each day with neck and spinal related problems. Chiropractic is safe, effective and well researched.
Chiropractic has always been under fire by the medical industry because of competition and greed. 1902 Palmer College of Chiropractic

graduated 15 chiropractors by 1906, D.D Palmer was prosecuted under the new medical arts law in the states of Iowa for practicing medicine without a license, and chose to go to jail instead of paying the fine. He spent 17 days in jail, but then elected to pay the fine. Shortly thereafter, he sold the school of chiropractic to his son, B. J. Palmer. B. J was a bit more feistier and savior than his father and he fought the medical establishment in every state getting chiropractic legalized and licensed in every state. Chiropractic continues to grow despite the medical and pharmaceutical establishments efforts to destroy the practice and outstanding reputation of Chiropractic.

grow, being well researched and studied to fully understand the biologic and physiological effects of an adjustment. There are over 200 different techniques of chiropractic practiced with focuses on pediatric, sports, neurology, upper cervical, sacral, occipital, addiction, joints and extremities.

Degree Requirements: Chiropractors are well educated and must obtain a Doctorate’s degree and be licensed in the State they practice in. The basic educational requirements for graduates of chiropractic measures up equally to medical schools. While each doctor has their own specialties, the hours of classroom instruction are about the same. (The following class hours for basic science comparisons were compiled and averaged following a review of curricula of 18 chiropractic colleges and 22 medical schools.)

After graduation chiropractors must attend continuing education classes in health to maintain their license. Chiropractic care is covered by most major insurance companies and the V.A and military have started using the services of chiropractors after discovering the major benefits it has had on soldiers with back and neck condition.

The original focus of the early chiropractor was not back or neck pain, it was to remove pressure off the spinal nerve to allow the body function at its optimal level.

Pain relief and normal function was the result. Chiropractic patients regularly get resolutions with such conditions as vertigo, tinnitus, TMJ, heart burn, colic, ear aches, migraines, carpel tunnel. These are conditions not thought to be chiropractic cases but are indeed cases that chiropractic has had great success with. It is a very simple concept, move pressure off a nerve and the organs the nerve supply will function better. Chiropractic got pigeon holed into neuro muscular skeletal classification by the insurance industry.

What we are finding more common is activities such as pro-long standing, sitting, working at the computer, twisting is leading to back and neck problems. A subluxation left untreated will result in prolong joint dysfunction that can affect the normal function of the spinal nerve complex effecting the organs

the nerve supplies. Over time if the condition is not corrected it will lead to degenerative changes to the bone and soft tissue. Chiropractic is both preventative and restorative. Whether you are having symptoms or no symptoms you should have your spine evaluated to prevent future problems just like you do with regular dental check-ups. 401-433-3600