What You should know and Consider before you think you are all right. (if any) visible damage done to the rear of one’s motor vehicle or the front end of the impacting vehicle. Because there is little to no visible damage the people whom where struck are misled to believe they sustained no bodily damage or are told they don’t have a problem.   Most of these victims face considerable opposition to their injury claims from skeptical insurance adjusters and defense attorneys because it is considered low impact and only minor damage.

Sometimes right after a low impact accident a person rear -ended is a little sore in the neck and back leading them to believe there is no serious bodily injury only to wake up the next morning to find they have considerable neck and back discomfort. This person is often accused of faking an injury.   Sometimes there is minor stiffness 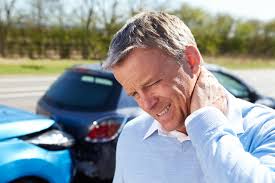 and soreness that never gets worse or never gets better. The occupants may complain of various injuries from neck and back strains to more serious spinal or joint problems. Those who are struck in the rear from these minor impact accidents do have injuries, especially neck injuries.

Auto accident studies show that approximately 10 percent of the occupants of the stricken vehicle in rear-end automobile collisions will develop whiplash syndrome. In cases of whiplash syndrome approximately 10-15 percent of patients suffering from cervical soft tissue injuries following motor vehicle accidents fail to achieve a functional recovery. Documented tests demonstrate that low-impact accidents adversely affect the ligaments, tendons, and muscles in a person’s neck or back. Whiplash can persists for years with no obvious 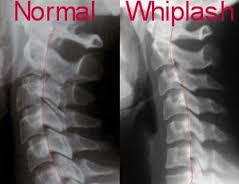 evidence showing up with radiological or other quantitative diagnostic techniques. Our present-day technology does not show precise identification of deranged soft tissues. One researcher did a seven year follow-up study of neck injury patients without previous x-ray evidence of disc disease and found that 39 percent had developed degenerative disc disease at one or more disc levels since their auto accident injury.

Automobile impact research demonstrates that an eight mph rear-end collision may result in a two g force acceleration of the impacted vehicle and a five g force acceleration acting on the occupant’s head within 250 msec of impact. (One g equals an acceleration of approximately 32 ft./sec.) Car crashes happen in literally one/two eye blinks. The point is that the head and neck experience more g forces than the car in low-speed impacts. 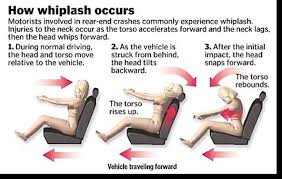 Research proves that it is wrong to assume that maximum neck injury only occurs in a high-speed collision; it is the slow or moderate speed collisions that causes maximum hyperextension of the cervical spine. Researchers who study accidents concluded: “The most injurious head deflection in an acceleration injury is hyperextension. Even though sustained in low-velocity, rear-end collisions, this acceleration injury can produce forces significant enough to produce musculoligamentous tears with resultant hemorrhage and even disk disruption and avulsion fractures of the vertebral bodies. In addition, the integrity of the apophyseal joints may be violated.” 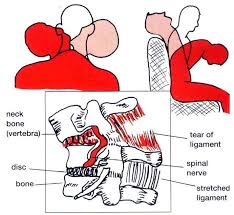 Low Back Injuries are also very common in rear end collisions. The occupants cannot brace themselves nor force their back against the seat. Most bumpers are built to withstand a low impact (with limited visible damage) but while there may be very minor property damage the body gets snapped around and the body sustains “Soft Tissue” injuries – – including bruises, chest and rib injuries.

Seat Belts Save Lives!!! But they Cause Injuries.

It’s been proved (beyond the shadow of any doubt) that while seat belts save lives they can also cause injuries! Since the introduction of Seat Belt Legislation, the incidence of “Soft Tissue Injury” has increased an astonishing 21%!

One researcher’s data found that: “The belt has very little if any deterring effect on the cervical spine as the head and neck continue forward motion. Even the addition of a shoulder harness will not relieve but will only increase the forces which must be absorbed by the head and neck,

although such a harness may prevent contact injuries”. He noted: “Seat belts save lives by preventing occupants from going through the windshield, but they contribute to the neck injury.”

The Office of the Chief Scientist (London), Department of Health and Social Security, had this comment regarding seat belts in 1985: “We predicted an increase in the case of two injuries: sprains of the neck and fractures of the sternum. Both were confirmed. The other apparent increase in a major injury which was not predicted was abdominal injuries of organs other than the kidney and bladder.”

Clemens and Burrow” report that any shoulder restraint mechanism in front-end collision increases the degree of cervical flexion, with potential for injury.

Suppose I have a Pre-existing Condition?

Elderly people, people with neck and back condition or those in poor physical condition who may have preexisting conditions in the neck or back are more susceptible to injuries from impacts at low speeds. Common predisposing factors include people with degenerative joint disease and spinal stenosis. The potential for injury in these people is increased because the neck is less resilient. If degenerative changes are present it should be noted in the report of findings as they may affect the prognosis and outcome. A claim of aggravation of a known pre-existing injury may occur after a low-speed impact.

Those in poor physical condition are more prone to soft tissue sprain (ligaments, tendons) can produce a partial or complete tear in the effected soft tissue. Because you have or had a pre-existing condition before the accident does not mean that the you are responsible for the injury or the severity of it. It only means the impact from the accident caused your condition to be symptomatic.

Other Factors Relating to the Severity of Injury:

Another major factor related to the injury is the occupant’s position in the car and the use of head restraints. If the head is rotated it will adversely affect the extent of the injury.  Headrests are the best protection in rear-end collisions. However, if the headrest is set too low, the head is able to roll over the top of the headrest, producing even more hyperextension.  Experiments were produced to simulate relaxed necks of unexpected passengers in struck vehicles. Without a headrest, the neck extension can become almost 60 degrees, which is a potential danger limit of whiplash at collision speeds as low as two mph.

The exact position of the head at the moment of impact is important to know. If the head is turned, the injury will be greater on the side it is turned to. When head rotation is present, the pattern of tissue injury is potentially more severe.

A surprise collision will usually cause more injury because the ligaments will be injured more than the muscles. When a person knows they are going to be struck, they will tense up the muscles and therefore injure the muscles first. One study noted: “In impacts up to 15 mph the right front seat passenger stands a greater danger of injury than does the driver, because the driver can brace himself to some extent by holding onto the steering wheel.”

In a rear impact, the occupant’s neck and back are first thrown backward and then forward, forcing the body to stretch unnaturally (sprain, strain), so the person may feel the effects of the injuries for months. It is not unusual that an injured party will have chronic pain that lasts for years or will never fully go away.

If the injury complaint includes interscapular pain, upper extremity pain, and numbness into the arms and hand, this case often carries a poor prognosis. Exam findings of a sharp cervical curve reversal, or restricted motion at one level on flexion/extension radiographs also carries a high probability of a poor outcome. One outcome study found that when the injury included shoulder pain and arm and hand pain indicated a slower progress toward recovery, and that if upper back pain and interscapular pain present, a longer and more intensive treatment program was needed.

The car fender or bumper is designed to avoid or reduce damage in a low-speed collision. It is not a safety device to prevent or reduce injuries to people in the car.

If you have been involved in an auto accident and you are not sure what to do, call my office today 401-433-3600 for a thorough assessment of your condition.